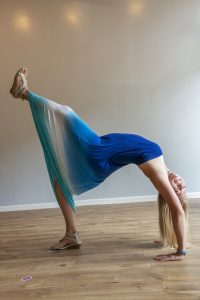 Kati was born in Colorado Springs and has called the Vail Valley home for over 20 years. She has her bachelor’s degree in political science from Colorado College and her master’s degree in secondary education from University of Phoenix. She lives in Eagle with her cat, Bodhi, and roommate Mike. Kati teaches at both Yoga off Broadway as well as Revolution Power Yoga in Avon and practices yoga nearly every day. Kati has been practicing yoga on and off for about 10 years. It wasn’t until Kati started attending yoga at Revolution that sparked a passion for the practice and inspired her to sign up for the 200 hour certification. When Kati is not on her mat she can be found at the airport in Eagle where she manages Avis and Budget rent a car. In the winter she loves spending time on the hill snowboarding. Kati loves to travel, cook, raft, camp, and hike, anything outdoors. Kati is an ambassador at RPY and she is forever grateful for the community she has found in Yoga off Broadway and Revolution Power Yoga. Kati has been through some tough times in the years past and was looking for something bigger and something to change her. She definitely found it in yoga and through the teacher training! She is super excited to be a part of the team!

We're not around right now. But you can send us an email and we'll get back to you, asap.